10 of the Best Out-of-Office Messages We Could Find

When it comes to the final days before vacation, people tend to fall into one of two camps: 1) those who watch the clock incessantly, and 2) those who are so busy before they leave, they might even forget to put up an out-of-office email message.

If you’re anything like I am, you probably fall into team two. That doesn’t leave a lot of time to get creative. But if you plan ahead, you might be able to craft some hilarity.

Out-of-office messages run the gamut. From funny, to clever, to snarky, we’ve come across some of the best — from Google, and from colleagues.

Here are some of the gems we found. And once you’re back from vacation? Well, not to rush you, but this email productivity guide can help you get back on track after your out-of-office time.

We’ll give this guy first place, since we almost feel bad for him. Almost. Rather than using an out-of-office message for a tropical vacation, he used one to explain his absence during what would likely be a snow storm. Not only did it give us a chuckle, but it also generated a certain amount of empathy — which is often the key to good content. 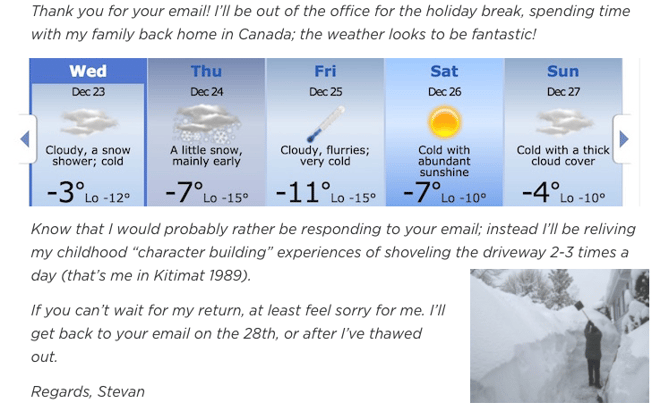 If your email client allows it, you could always just use an image to express your out-office-sentiment, like this one. After all, they say that a picture is worth a thousand words — and, visual content is still essential to successful marketing.

Are you familiar with the film Field of Dreams? If not, allow us to fill you in. It centers around baseball and a family in Iowa, but saying any more might spoil the plotline.

Movie synopses aside, the opening line of this out-of-office message was taken directly from the Field of Dreams script — fitting, given the sender’s travels to Iowa. So before you leave, research some famous quotes about the place you’re visiting. It might test the recipient’s knowledge, but more likely, it’ll just make them smile. 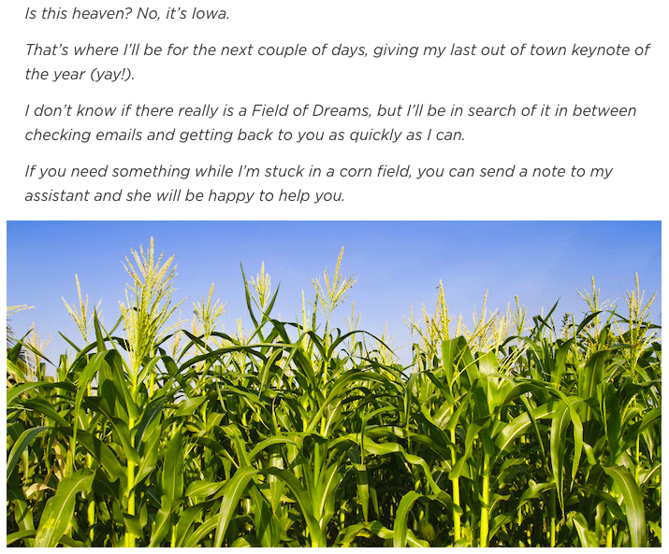 When my colleague Sam Mallikarjunan went on vacation, he set an out-of-office message that was both clever and smart. First, he sent the recipient on an imaginary scavenger hunt to “the highest …read more