5 Old Habits B2B Marketers Should Leave Behind in the 2010s 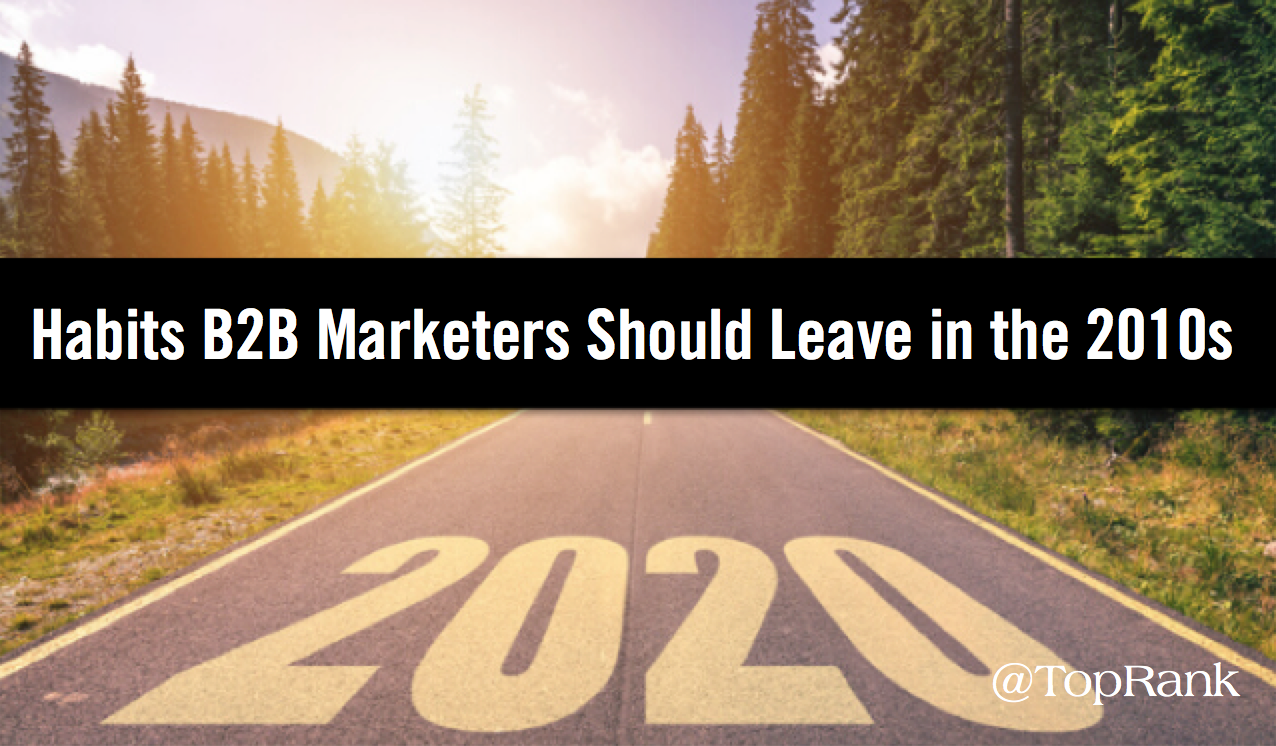 We’ve officially turned the calendar to 201… er, 2020! First the first time in 10 years, we’ll all be writing a different numeral as that third digit. That’s a new habit that’ll take some getting used to.

As B2B marketers, perhaps we can take advantage of this opportunity to form a few other new habits. Specifically, I’m talking about making adjustments to the way we approach our craft, so to align ourselves with the evolved marketplace of the 2020s.

The New Year is always a fitting time for resolutions and aspirational goal-setting. With this particularly momentous milestone, I’m urging all my B2B marketing peers to think big and commit to some major shifts in mindset for the decade ahead.

These five habits ought to be left in the 2010s along with fidget spinners and the Mannequin Challenge.

5 Habits for B2B Marketers to Leave Behind in the 2010s

Chances are, you spend your days creating content or managing campaigns on a desktop computer or laptop. As such, it’s all too easy to assume your audience will consume it in the same way. But, chances are, they won’t.

The explosion of mobile usage has been among the most unmistakable sea changes of the past decade. In 2010, the iPhone was still a relatively new product and mobile accounted for 2.9% of all web site traffic. By 2018, that figure was up to 52.2%. Smartphone ownership rose from 35% in 2011 to 81% in 2019. Mobile overtook desktop in 2016 and there’s been no looking back.

Despite this, I still routinely encounter websites, landing pages, and content experiences that look great on desktop and clunky on a smartphone or tablet. Too often, mobile is an afterthought. Instead, it should be our first thought. Bringing a mobile-first mindset into the 2020s will position marketers to be on the same page as the people they’re trying to reach.

What To Do: Scrutinize your most critical existing content assets — visuals, responsiveness, usability — on multiple different types of devices to ensure you’re delivering a quality mobile experience. Also, resolve to test all new content on mobile before desktop in 2020.

At the start of the decade, content marketing was in a relatively nascent stage. The primary objective for marketers was simply to produce, as reflected by the first-ever B2B content marketing benchmark report from newly established Content Marketing Institute (CMI) in 2010. In this report, the top-cited challenges were: