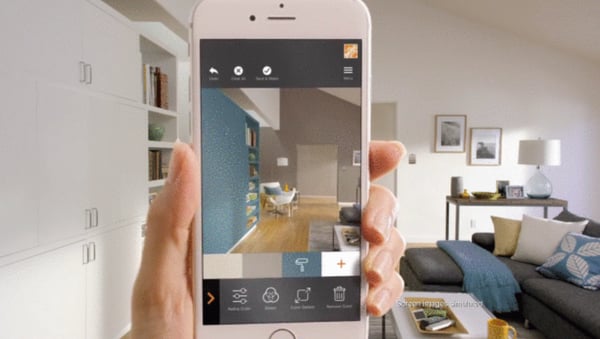 If you’re anything like me, the idea of trying on items in the dressing room can sometimes deter you from shopping at all. More than once, I’ve said, “I’ll buy it, try it on at home, and return it if I don’t like it,” just to avoid the hassle of carrying a pile of clothes into a dressing room line.

In the interest of convenience and comfortability,

For now, augmented reality (AR) is still largely a novelty — AR’s newness alone contributes to its ability to surpass print, online, and television advertisements in terms of shock-factor. As The Drum reports, AR can capture people’s attention for over 85 seconds, increase interaction rates by 20 percent, and improve click-through rates to purchase by 33 percent.

Right now, people will stop and look at AR-inspired experiences, regardless of the campaign’s overall quality. But as more companies incorporate AR into their marketing strategies, and as AR technology becomes more ubiquitous, you’ll need to produce more thoughtful campaigns to impress your audience. Eventually, AR will become mainstream, and its prevalence in the industry will make it harder to compete.Tim Cook, Apple’s CEO, has said that AR will one day be as important in our everyday lives as “eating three meals a day.” So, the question is — how can your marketing strategy effectively capture an audience’s attention, once AR has become commonplace?

Here, we’ll look at eight companies that use AR in innovative and inspiring ways. These examples should be all the inspiration you need to brainstorm and execute a brilliant long-term AR marketing strategy.

Decorating a home isn’t easy — how do you know if you’ll actually like the yellow paint that looks beautiful online, but might be too bright in your bathroom? What if that coffee table doesn’t fit in your living room like you’d hoped?

In 2015, Home Depot released their Project Color app, which uses patent technology to show users what a paint color will look like in their home. The AR technology takes into account lighting, objects, and shadows in the room, so you can see how that yellow shade will look in real life. If you don’t trust your own judgment, you can also share images from the app on social media, to get a friend’s opinion.

In 2017, Home Depot took it a step further — now, you can also use their app to check out how objects like patio furniture, faucets, and other products look in your home.

Home Depot isn’t the only home furniture store to use AR to create value for their users — Lowe’s and Ikea have similar AR technology built into their apps.

If you’re anything like me, the idea of trying on items in the dressing room can sometimes deter you from shopping at all. More than once, I’ve said, “I’ll buy it, try it on at home, and return it if I don’t like it,” just to avoid the hassle of carrying a pile of clothes into a dressing room line.