Does IQ Matter in Business?

What determines success in the business world?

Is it your leadership ability? Negotiation skills? Unique perspective? What about your IQ?

While it’s likely that most businesses don’t require employees to take an IQ test as part of the application process, IQ tests and scores have long been used as a measure of a person’s intelligence and predictors of their success.

But what about in the business world? Can a number on a scale from 0–200 accurately predict someone’s success in the real world? The question it all boils down to, really, is this: What measures real-world success, and to what extent does what IQ measures play a part in it?

What Does IQ Measure?

IQ stands for “intelligence quotient,” and it’s meant to measure a person’s ability to acquire and apply knowledge and skills.

That first part — the ability to acquire and apply — is key. IQ doesn’t measure a person’s general knowledge of facts and figures, like whether they know the capital of Russia. It’s meant to measure intelligence functions like problem-solving skills, pattern recognition, mathematical logic, and finding connections among verbal concepts.

For example, you might see a world analogy problem on an IQ test, like: “Kitten is to Cat as Puppy is to _____.” To solve this problem correctly, you’d need to understand the relationship between a kitten and a cat, and then apply that relationship to that of a puppy and a dog.

Other questions look for spatial reasoning skills. For example: 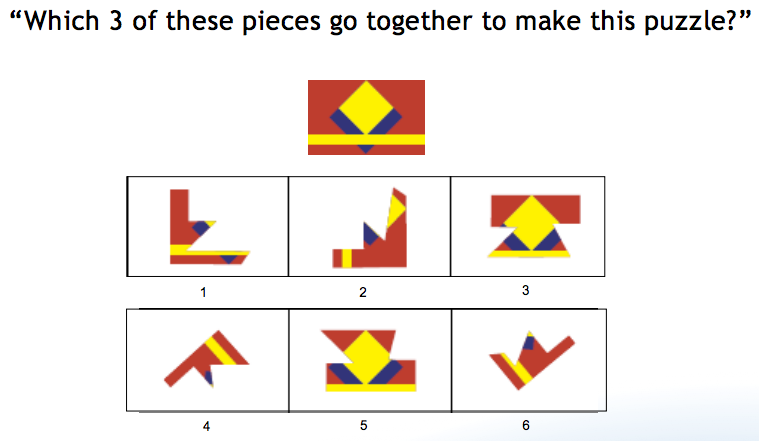 (Don’t worry. I’m not testing you on this one.)

So where does the “quotient” part of “intelligence quotient” come from? From how IQ scores are calculated. The original IQ tests, developed in France in the early 1900s, were meant to help predict which children were most likely to experience difficulty in school.

IQ was originally calculated by dividing your “mental age” (measured by the test) by your actual age, and multiplying the resulting quotient by 100. That resulting number is your IQ score, and it’s compared to that of the rest of the population on a scale of 0–200.

While many tests have been developed since then, the major thing all IQ tests have in common is that they measure a person’s cognitive ability — but specifically their ability to solve simple and theoretical problems.

Many questions on an IQ test for how well a person can learn new information, for example. The test might do this by teaching the test-taker new information in a simple format, and then seeing how well they retain that information. While this works well for simple information like recalling word lists and retelling simple stories, Psychologist W. Joel Schneider warns that it’s difficult to design a test that measures retention of complex information (like a person’s memory what happened in a long, complicated board meeting) without the test being “contaminated by differences in prior knowledge.”

While IQ tests are still mostly used to study children, many have wondered aloud whether adult tests have a predictive power that’s useful in the workplace, too — particularly when it comes to hiring new people or predicting performance.

Does IQ Matter in Business?

The problem with relying on IQ, or even IQ-style, theoretical questions to predict business success isn’t with what IQ actually measures. In fact, cognitive ability is certainly important for many jobs. Rather, the problem is with what IQ doesn’t measure.

Your IQ score won’t tell you (or your boss, or your hiring manager) anything about your emotional intelligence, your creativity, or your practical intelligence, i.e. “street smarts.” As much as we sometimes wish they did, real business problems don’t always have a single right answer reached by a single method, and they aren’t removed entirely from outside experiences.

Real business problems — practical problems — require you to recognize the existence of a problem, seek out information to help solve it, gather various acceptable solutions, and evaluate those solutions in the context of prior experience and relationships. They also require you to be motivated and involve yourself personally.

While the cognitive intelligence and specific skill sets you might need to score high on an IQ test may correlate to some success depending on your job, there are other, sometimes more important ways to measure success in the business world.

If Not IQ, Then What?

One major example of an alternative indicator of success? Your emotional intelligence. This refers to your ability to identify and monitor emotions — both your own and others’. It’s critical for problem solving and relationship building in the business world. It doesn’t matter if you can stand up and recite the Fibonacci sequence on the spot; if you have trouble handling change and developing and managing productive relationships, you’ll find it challenging to find major success in many business roles.

Another interesting measure of success? Something called “grit.” Studies at the University of Pennsylvania found that students who don’t have the highest IQs in their class but still received high grades share “grit” in common.

What’s that? Grit is less about cognitive ability and more about cognitive control; i.e. your ability to delay gratification in pursuit of your goals, control your impulses, effectively manage upsetting emotions, hold focus, and possess a readiness to learn, according to Psychologist Daniel Goleman.

What’s more, a 30-year study of more than 1,000 children found that cognitive control predicted success better than a child’s IQ, and better than the wealth of the family they grew up in.

There’s decades’ worth of research out there on the many factors that contribute to a person’s success, whether that means financial success, fame, or something else. We have an affinity toward measuring things — even things as intangible as intelligence.

To that end, I like the way Schneider puts it: “Our society at this time in history values the ability to make generalizations from incomplete data and to deduce new information from abstract rules.”

These deductions are what lead to scientific breakthroughs, and they serve as an amazingly helpful jumping off point. But that doesn’t mean your IQ score will tell you with much accuracy whether you — or your next hire — will be successful at a job.

By itself, a high IQ won’t guarantee you’ll rise above your peers. Success relies on much more than that.

What do you think: Do IQ scores have a place in the business world? What other skills do you correlate with business success? Share your thoughts with us in the comments.