From Space Jam to Pinball Expo: 11 Websites You Probably Forgot Existed (Until Now)

Have you ever met someone who looked like they belonged in another decade?

Maybe they couldn’t find it in their heart to let go of that awful pair of acid wash jeans, or perhaps they missed the memo that their collection of Zubaz pants should have been retired once the 80s ended. (Stop. It’s no longer “hammer time.”.)

As it turns out, they’re not the only ones clinging on to the past. For every modern, functional website that’s created, there’s one collecting dust in the depths of the internet, plagued by style of the decade in which it was created.

From a severely outdated presidential campaign website to a site chronicling the details of the 1994 Pinball expo, we’ve collected a roundup of some of the internet’s most nostalgic websites that appear to be forever stuck in a league of their own.

Ever wonder what the first ever website looked like? Well, you’re looking at it. Created by British scientist Tim Berners-Lee in 1989, the World Wide Web was originally developed to serve as a way to automate information-sharing between scientists in universities and institutes. This website — the first of its kind — served as a hub for the “World Wide Web” project where visitors could learn about the web’s features as well as how to access people’s documents and set up servers. 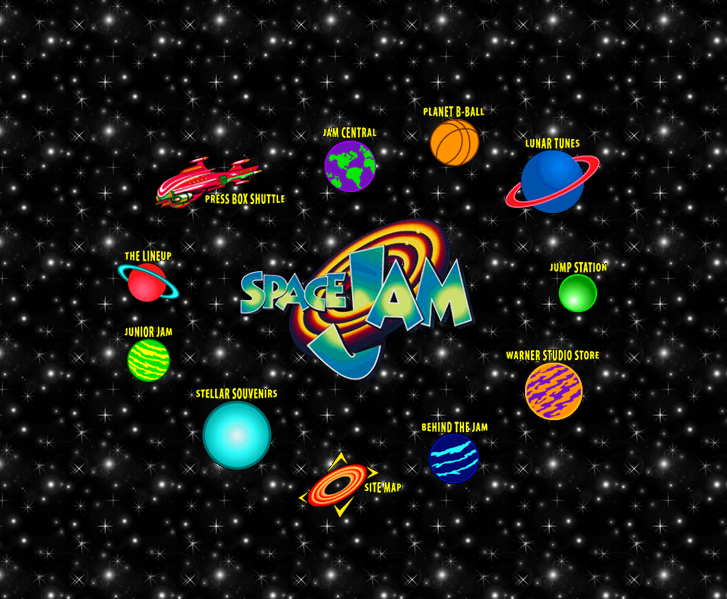 Remember that time Warner Bros. made a movie about Danny Devito sending aliens down to earth to kidnap Looney Toons for entertainment at his intergalactic amusement park … and then before we knew it, Michael Jordan got thrown into the mix for an epic basketball match?

Yeah. That was awesome. But what’s even more awesome is that the original website is still very much alive. Staying true to it’s late 90s roots, the Space Jam website remains unchanged, serving as a trip down memory lane for old fans.

3) Clarissa Explains It All

This early 90s Nickelodeon show followed Clarissa Darling (played by Melissa Joan Hart) as she dished out real talk about real adolescent issues: boys, pimples, bras, and so on. Even though the last episode aired on December 3, 1994, Clarissa fans can relive the magic by visiting this still-standing fan page. Whether you’re looking for cast information or you just want to listen to the catchy theme song, this website is your go-to resource.

This digital antique is proof that people don’t just dislike Internet Explorer … they really dislike it. This website, created by the opinionated Nathan Lineback, serves as an informational community for people to rally together against the now retired browser.

While Lineback’s original “rants” date back to 2005, it seems that he’s continued to publish routine updates, proving the severity of his decade-long disdain for Internet Explorer. Here’s one of his more … colorful … entries:

“IE 7, IE 7, IE 7, IE 7. Why is everybody so obsessed with IE 7?! Well, in all fairness it may have to do with the fact that MS has not released a new version since 2001 while all other browser vendors have been producing new versions like hotcakes – with actual improvements!!!! It actually would be nice if Microsoft would bring their rendering engine in to this century, but as I have explained before they cannot and will not do that because it would “break” all of the older content that relies on IE’s f*cked up behavior.

At any rate the IE 7 beta is crap, and it will not be any better when it is released. Goofing up the GUI to make everyone go “ooohhhh, it’s different!” doesn’t change the fact that it is evil crap and always will be evil crap.” 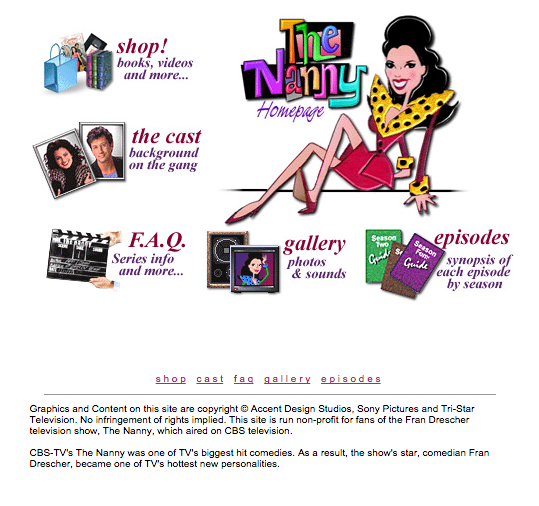 You know your website is old when you’re peddling VHS tapes. This dated website serves as a home page for the 90s sitcom starring Fran Drescher, in which she plays a Queens native tasked with nannying three wealthy New York children.

If you’ve never seen this show before, flip through the season-by-season episode guide to get a better feel for what it’s all about. This one may be an oldie, but it’s definitely a goodie.

I’m not gonna lie, this website is giving me a little bit of FOMO. I mean, who wouldn’t want to go to a pinball expo?

While the website’s design certainly shows its age, all of the important information for this expired event — from directions and accommodations to registration — still stands, frozen in time. 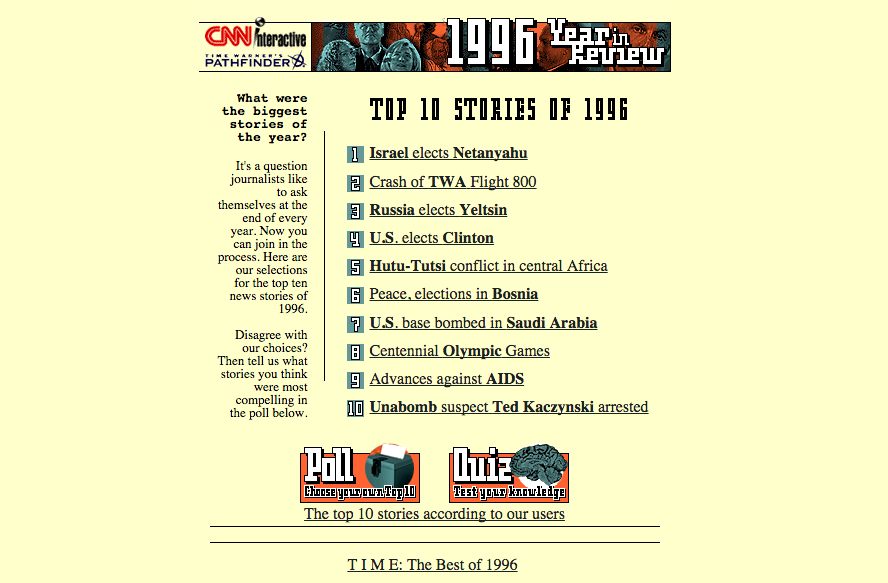 Talk about a blast from the past. This “Year in Review” from CNN chronicles the biggest stories of 1996, from Clinton’s election to the Centennial Olympic Games. Click into each of the stories to get transported to an equally outdated page with a brief description of each of the events — as well as some good, old-fashion images. 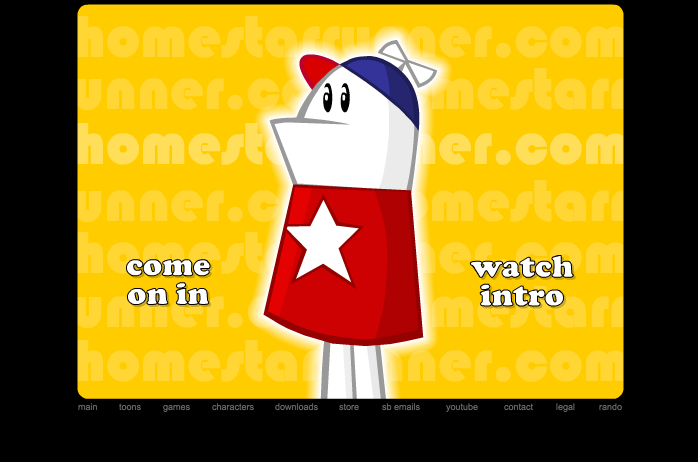 Created by 1996 by University of Georgia Student Mike Chapman and his friend Craig Zobel, Homestar Runner was originally formatted as a children’s book which followed Homestar as he entered the Strongest Man in the World competition.

In 1999, Chapman and his brother began experimenting with Flash Animation and used the book as a foundation to practice on. By 2000, homestarrunner.com was live, became wildly popular, and has since been continuously updated with new material. 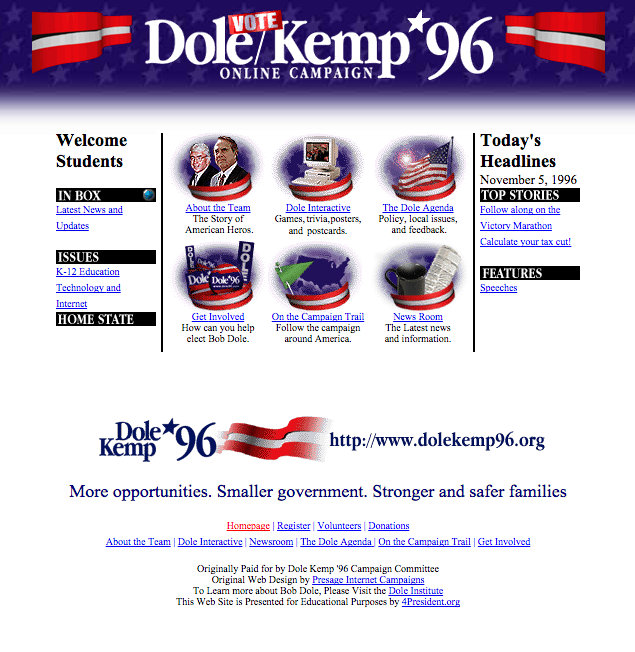 Last time I checked we were all following the progression of the 2016 presidential campaign, right? Looks like someone needs to break the news to Bob Dole, now 92 years old, that it’s time to throw in the towel on this one.

But while it’s still here, we couldn’t help but click around a bit. Our favorite part? The crossword puzzles listed under the interactive section. Because there’s no better way to blow off some political steam than to sit down with a good old-fashioned word game.

This antique iteration of what InGen’s website would have looked like is brilliant. (If you’re not familiar with the Jurassic Park series, InGen was the name of the compound where the dinos were kept.)

Created by Universal Studios in 1997 as part of promotion for the release of The Lost World: Jurassic Park, this website still stands. And it’s still awesome. We suggest digging into the dinosaurs tab to get your fill of prehistoric facts. 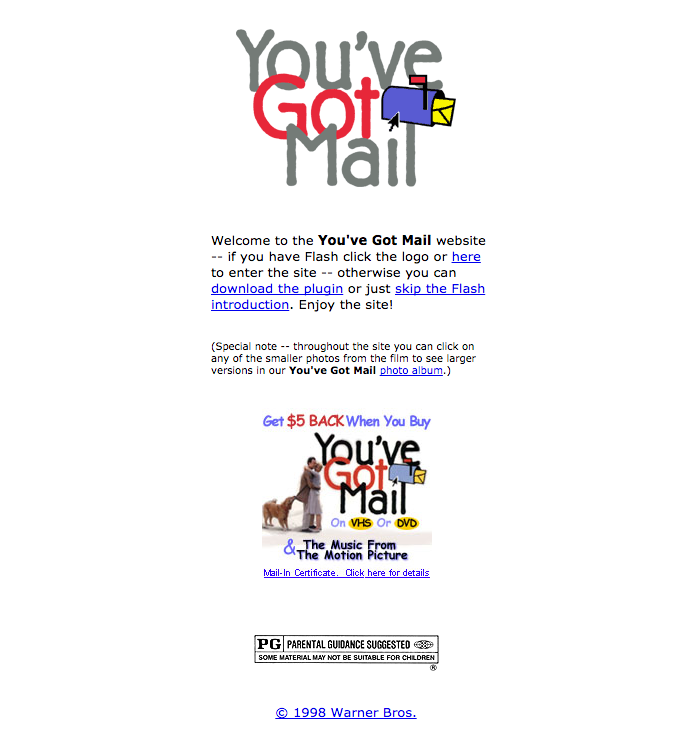 If you’re into rom-coms, you’re probably familiar with this movie about a struggling boutique bookseller and a corporate chain bookstore owner who meet online and … well, I’m sure you can guess the rest of the plot. The thing is, unless it’s your favorite movie of all time, you probably haven’t thought much about it since the late 90s.

You’re not alone. It looks like Warner Bros. hasn’t put much thought into it either, considering this old website from 1998 is still standing. If you’re looking for a real blast from the past, check out the site’s photo album with stills from the movie.

What are your favorite nostalgic sites? Share them with us in the comments.