Fuel Your Passion for B2B Marketing with These Famous Baseball Quotes 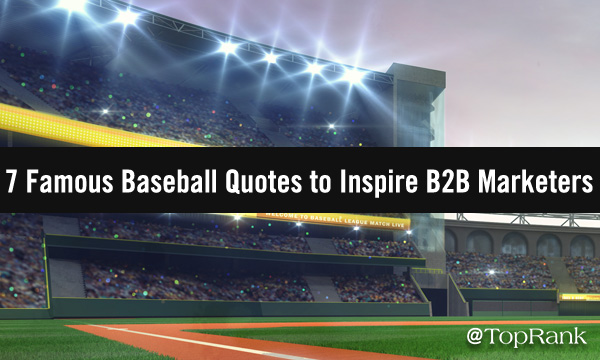 A few weeks ago, Major League Baseball enjoyed a historic moment with its Field of Dreams Game, played at the cornfield-surrounded site in Iowa where the legendary movie was based.

Naturally, this event brought on waves of nostalgia among those who cherish the 1989 classic and its many memorable quotes.

“Hey dad, you wanna have a catch?”

“This field, this game: it’s a part of our past, Ray. It reminds us of all that once was good and it could be again.”

Baseball is a complex and strategically sophisticated game that has evoked many wise and thought-provoking words over the years — often with applicability beyond the ballpark. I’ve noted in the past baseball’s parallels to marketing: methodical and rhythmic pursuits driven by patience, sequencing, and learning from failure.

As the MLB season enters its stretch run and the summer fades away, I thought it might be fun to run through some of my all-time favorite baseball quotes and extract insights about the current world of B2B marketing.

This is one of my favorite baseball quotes, courtesy of an iconic manager and Hall of Famer. Weaver is essentially speaking to the underlying randomness of baseball — the juxtaposition of controllable and uncontrollable factors.

You can develop good pitching. You can teach good fundamentals. You can even build a lineup full of sluggers. But that game-changing three-run homer (or better yet, grand slam) is ultimately a matter of chance and timely circumstance. Which is not to say you can’t improve your odds by taking good at-bats, getting on base consistently, and doing the little things well.

In our world, a fitting corollary for Weaver’s quote might be, “The key to winning in B2B marketing is engagement, trust, and landing a multi-million deal.”

“There may be people that have more talent than you, but there is no excuse for anyone to work harder than you do.” — Derek Jeter

Swap out “talent” for “budget” and you’ve got a good guiding mantra for any small business or lean marketing team. It is a plain reality that certain organizations and teams are equipped with fewer resources than the big fish, but that doesn’t mean they can’t compete on the same field. They just need to work hard, think outside the box, and create their own advantages.

“You can observe a lot by watching.” — Yogi Berra

Yogi was the king of quintessential quotes, so it was difficult to pick just one from him. This selection, like many from Mr. Berra, is a seemingly benign and obvious remark that is actually rather insightful.

Baseball fans and players alike know how much more can be perceived and understood with a keenly attentive eye: the outfielder playing too shallow, the pitcher tipping his changeup, or flags in the stadium indicating a …read more