How to Get More of Your Search Console Data from the API (Plus, Learn How to Use Python)

Because the file is already a JSON file, you can just name it “credentials” and check that the type is JSON. You can also turn on file extensions (instructions

And who can do it? Hopefully, it should be accessible to any beginner.

Why do we use the API to get Search Console data?

At Distilled, we often want to use Google Search Console data, but getting it from the interface is incredibly clunky:

We can get around that by using the API. Now we can get up to 5,000 queries at a time, we can apply multiple filters instantly, and we can run multiple queries quickly and easily.

We do this with Python.

Why is it useful to be able to run Python scripts?

Being able to run scripts is incredibly valuable. There are lots of amazing scripts out there, both on Github and written by other people in the industry; using them, you can pull down data more quickly and faster than you otherwise could.

We’ll be using Python for this tutorial because it’s a very popular language, particularly when working with large amounts of data.

Crucially, you don’t need to be able to write in Python to use the scripts — you just need to understand some basics about how to use them.

With APIs you can pull data from all sorts of exciting places, far more quickly than through the user interface. You can also often get more data.

How do we run Python?

If you’re on a Mac or a PC, I’d recommend downloading Anaconda. That will get you set up and running with Python 3, and save a lot of fiddling around.

Then we’re going to need a good shell (a command line interface, the place where you can run the script from). Mac has Terminal installed by default; on Windows, I would recommend Cmder.

Go ahead and install that.

(The rest of this tutorial is shown in Windows, but the same basic steps should be fine for a Mac!)

Double-check that Python has installed correctly

First open up the shell, type in python and hit enter.

Exit python by typing in exit().

For this example we’ll be using the search console script, written by one of our consultants, Stephan.

You can download it from his Github here. I’m not going to include a full tutorial on Git in this (although it’s a very useful tool for coding), so if you’re unsure how to clone a repository, just download the zip file: 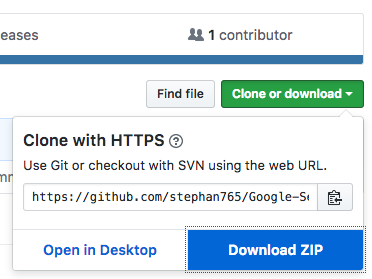 Once we’ve downloaded the example script (and unzipped the folder, if necessary), we need to navigate in our …read more