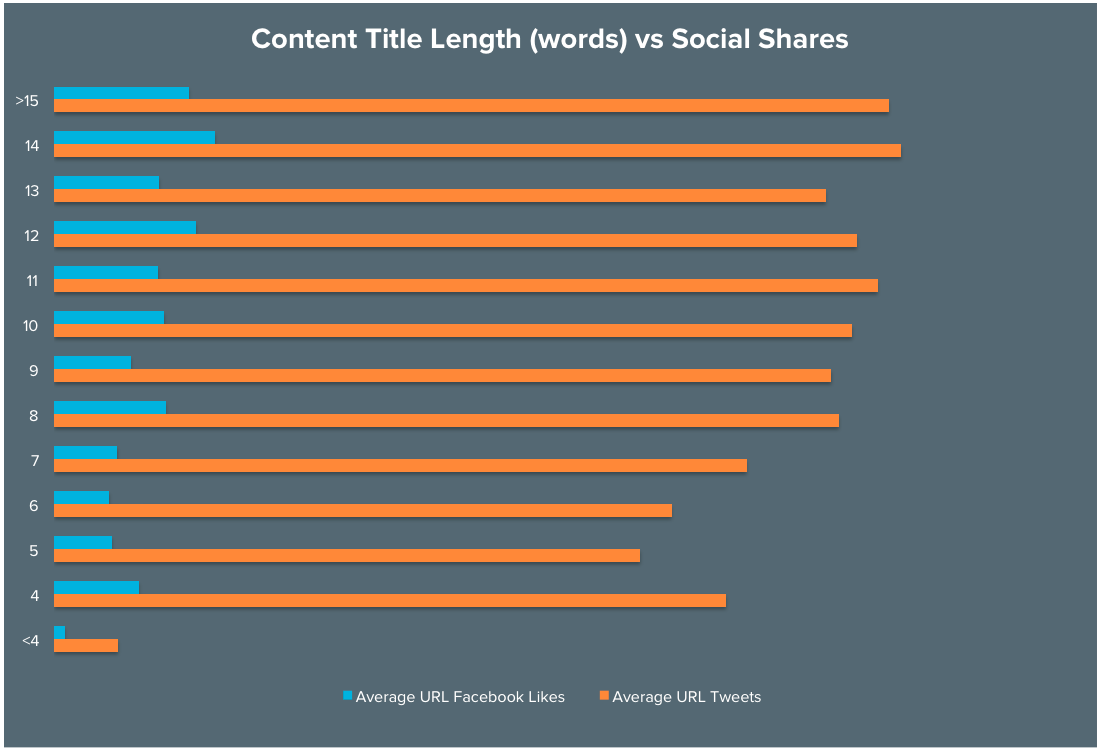 When it comes to writing posts and updating profiles for your blog and social media, one of the most common questions folks have is: What’s the character limit on X, Y, or Z? Another common one: What’s the ideal character count for X, Y, or Z?

For example, you probably know the character limit for a tweet is 140. But did you know that a link takes up 24 of those characters, leaving you with 116 characters to play with? Or that the ideal length of a tweet that includes a link is about 120 characters, not the full 140?

While we’ve written before about what perfect posts look like on your blog and various social media networks, we thought it would be helpful to gather the numbers for character limits and ideal character counts all in one place.

Below, you’ll find the short version, followed by a more detailed guide to character limits and ideal character counts for posts on your blog, Facebook, Twitter, LinkedIn, and Instagram. The more detailed version includes links to research studies, our own findings at HubSpot, and advice for how to optimize your posts and profiles.

Click a category title to jump to the detailed version.

Ideal Length of a Headline: 8–12 words and under 70 characters.

The length of your headline depends on what your goals are and where it will appear.

In our own analysis at HubSpot, we found that headlines between 8–12 words in length got the most Twitter shares on average, while headlines with either 12 or 14 words got the most Facebook Likes.

The folks at Outbrain found that headlines with eight words had a 21% higher clickthrough rate than the average title. We recommend testing out headline length to see what works best for your particular audience.

This may not be what you want to hear, but the best answer to the question of how long a blog post should be is: as long as it needs to be. Blog posts vary too greatly in topic, depth, and so on for there to be a single benchmark. It should be as long as it needs to be to serve its purpose, whether that’s thought leadership, driving leads, explaining a new concept, or something else.

That being said, if you want cold, hard numbers, there are a few ways to measure ideal blog post length.

Time to Read: The folks over at Medium measure article length based on how long it takes for a person to read the article. According to their analysis, the post length that captures the most attention on average were posts that took seven minutes to read, which works out to be about 1,600 words. 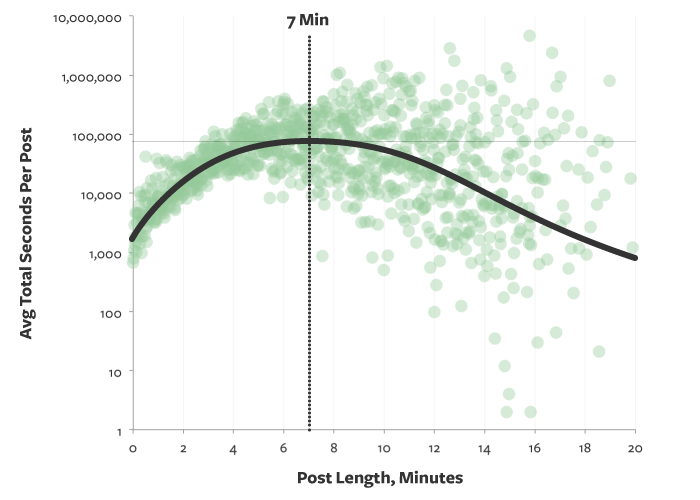 Word Count: Here at HubSpot, we recently analyzed the effect of blog post word count from our own blog on organic traffic and found that the sweet spot was 2,250–2,500 words. 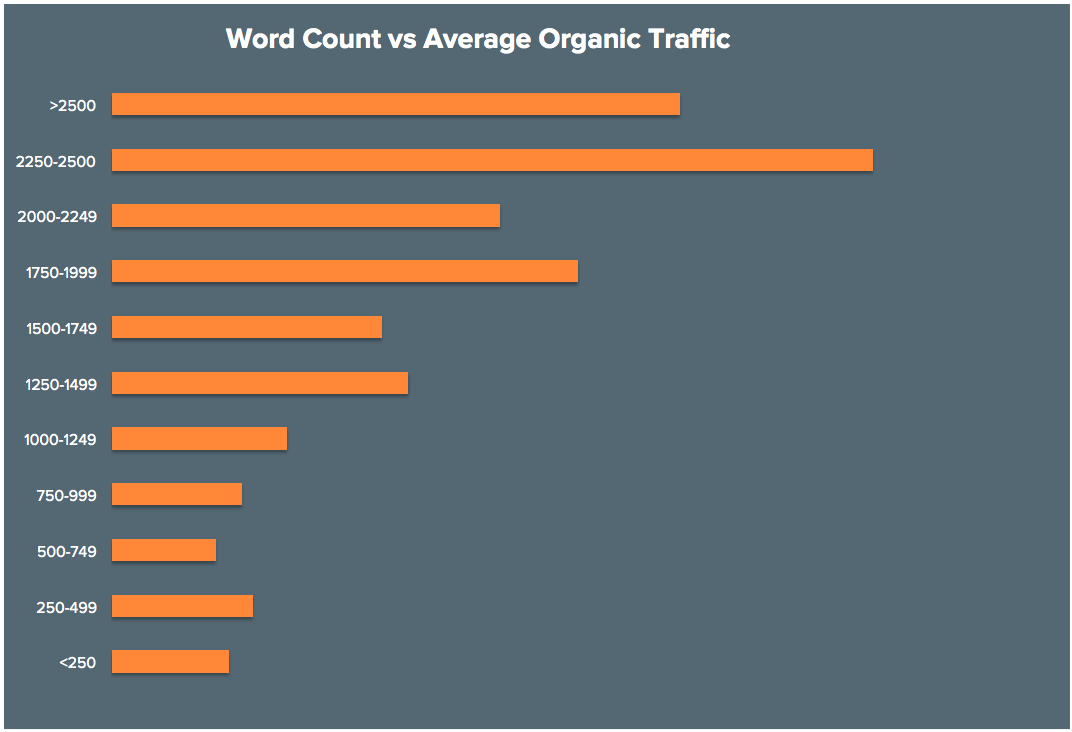 We also found articles over 2,500 words got the most social shares and earned the most inbound links.

You might be thinking: There’s a pretty big difference between 1,600 words and 2,250+ words. That’s because of the incredible variation in ideal length for a blog post. We recommend testing out blog post length to see what works best for your particular audience.

Ideal Length of a Title Tag: About 70 characters or fewer.

A title tag is the HTML title element that’s used to describe the topic of a webpage. You’ll find them in the title of a search engine result page (SERP), and in the top bar of an internet browser.

A title tag should be about 70 characters or fewer in length so it doesn’t get cut off in a Google SERP (Search Engine Results Page). This number can vary because Google seems to measure in pixels, not characters. In other words, it appears that they cut off a title tag after a certain width: about 512 pixels. Google will also bold certain keywords used in a search query, which can affect pixel width significantly. So at the end of the day, 70 characters is just a benchmark.

You can double-check the length of your meta description and title tags with this handy tool from SEOmofo.

Ideal Length of a Meta Description: About 155 characters or fewer.

A meta description refers to the HTML attribute that explains the contents of a given webpage. It’s the short description you see on a SERP to “preview” what the page is about. 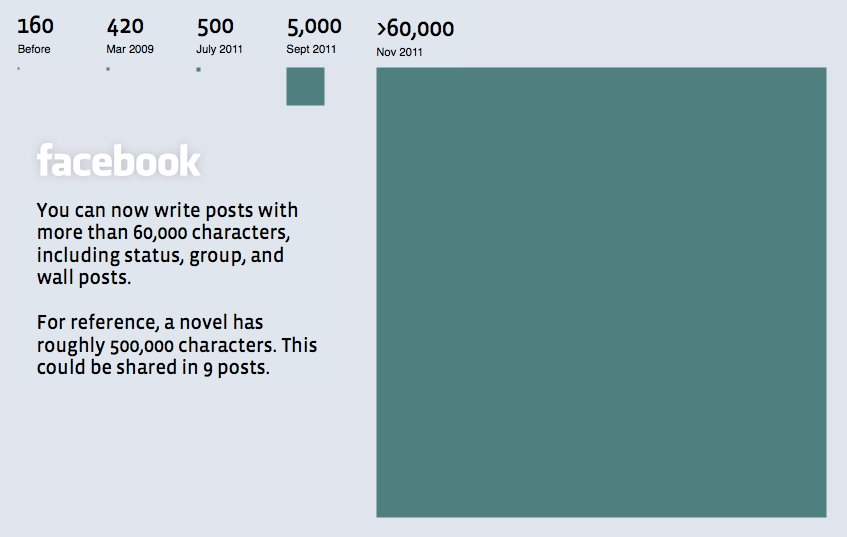 Ideal Length of a Status Update: About 40 characters.

“The social gurus will throw around the number 40 characters,” says Chelsea Hunersen, HubSpot’s social media and community growth manager. “That data seems to be backed up by BuzzSumo’s ranking of HubSpot’s own Facebook Page, but ideally, you’ll want to use the copy in a status update to provide context for whatever you’re linking to.”

That being said, Hunersen says that from her experience, the copy of the status update itself isn’t as important as the copy in the meta title or meta description that gets pulled in when you insert a link into your post. “Often, people look at the image of the article and then directly down at the meta title and meta description for context clues,” she told me. “A lot of people don’t realize you can change those.”

Ideal Length of a Video: Between 30–45 seconds.

While there aren’t too many studies out there on the ideal length of videos on Facebook, best practices for sharing videos on social are to keep it short: Just enough time to deliver a punch, but without forcing users to leave their environment.

According to AdWeek, Facebook’s auto-playback feature makes 30–45-second videos optimal. Here at HubSpot, we’ve found that our best-performing organic videos have come in at about 30 seconds long.

The fonts you pick are incredibly important. Don’t believe us? The proof is in the “papyrus”.That’s a font, btw.

That being said, optimal length can vary depending on the topic. “If you produce something as catchy as BuzzFeed and Refinery29 are putting out there, it can be up to five minutes long,” says Hunersen.

Regardless of the length of your video, Hunersen reminds us that all Facebook videos start without sound, meaning users have to make a concious decision to stop scrolling through their feeds and unmute the video. Facebook videos should be visually compelling from the get-to, make sense without sound, and be engaging enough to encourage the user to stop and watch.

Max Length of a Comment with a Retweet: 116 characters.

When you use Twitter’s “Retweet with Comment” feature, it means you’ve pressed the rotating arrow icon to retweet a post, and then added a comment in the text box provided. The retweet takes up 24 characters, leaving you with 116 characters for the comment.

Links account for 92% of all user interaction with tweets, so you’ll definitely want to include them in most (if not all) of the tweets you publish. They’re your strongest chance of gaining views and shares for your content.

Also, remember to include a space between your tweet copy and your link. Not including a space before the link is one of the most common forms of link errors.

Using media in your tweet is a great way to engage your followers. In fact, research shows using images in tweets leads to higher clickthrough rates — as much as 18%.

Images, GIFs, and videos take up the same number of characters in a tweet for Twitter.com and most publishing tools.

(Note: Different publishing tools may have different character counts for links and images. For example, Twitter.com counts an image as 24 characters, but Tweetdeck counts it as 25.)

Want to add more text to your tweets? One simple hack is to put text in an image, like in the tweet below. Here are some free templates to get you started. (The best ones for Twitter are in the Social Media > Rectangular folder.)

Everlane’s @MPreysman on the simple rationale behind why they moved to Facebook messenger https://t.co/XC3M4IQwlv pic.twitter.com/0FlikGQXHY

(Again, note that different publishing tools may have slightly different character counts for links and images.)

To make your mornings easier, start by changing the end of your day. We’ll explain. https://t.co/PVz7UdVPSS pic.twitter.com/lZ1FYhseoS

The 120-130-character range is the sweet spot for high clickthrough rate, according to an analysis of 200,000 tweets with links. This leaves enough space for people to include a short comment if they choose to manually retweet you.

Ideal Length of a Hashtag: Under 11 characters; shorter if you can.

While Twitter hashtags can technically be any length up to 140 characters, remember that people will want to accompany the hashtag with other copy. Short hashtags are always better. Ideally, your hashtags should be under 11 characters — shorter if you can.

Video Length in a Tweet: Up to 30 seconds long.

Smartphones & tablets are on th

Your professional headline is the brief description about what you do that appears right below your name on LinkedIn.

Keep in mind that if you update your Twitter status through LinkedIn, you’ll want to keep the character count to 140 characters or fewer.

With a maximum of 2,200 characters, Instagram provides an enormous amount of space in their Instagram captions. But it’s worth noting that they recently started capping captions at three lines without users having to click “more” to see the whole thing, if they’re viewing the post in their general feed.

That being said, we don’t recommend keeping your captions super short so users can see 100% of it without having to click “more.” Instead, frontload your captions with the important content or text calls-to-action, and leave any hashtags, @mentions, or extraneous information for the end.