What Do Snapchat Emojis Mean?

There are hundreds of emojis available on iOS and Android mobile device keyboards. Everything from tacos to national flags to artists is represented in cartoon emoji form.

But let’s be real here: Most of us just use the same few emojis over and over.

If you know me, you know I love two things more than anything: cats and sleeping. So it’s fitting that the two emojis I use most often in my texting keyboard are:

Another thing you may already know about me is that I love using Snapchat. So when emojis started popping up in my list of chats with friends in the app, I needed to get to the bottom of it.

In this post, we’ll dive into the history of Snapchat emojis and what they all mean. Bear in mind that these emojis vary slightly across iOS and Android devices, so we’ve written out what the faces look like, too.

What Do Snapchat Emojis Indicate?

Snapchat emojis track the activity and behaviors between Snapchat users and their friends. The frequency, timing, and pattern of your Snapchat interactions with other users will determine which emojis, if any, appear in your list of Snapchat chats.

Not sure what I mean? Check out my list of Snapchats, along with a few different emojis you might see in your own app. To access this page, open up your Snapchat app, and swipe right. 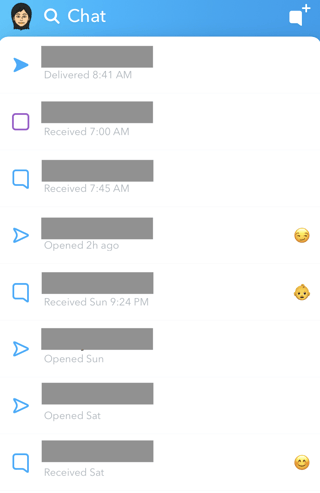 When Snapchat was first created, the app used to show who users’ best friends were publicly (best friends are the users they sent the most Snaps back and forth with). You can imagine why users took issue with this. Can you imagine the awkwardness of finding your best friend or significant other was best friends on Snapchat with somebody else?

So in 2015, Snapchat (now Snap. Inc) axed this feature in the name of user privacy and hid the lists of other users’ best friends — to more outraged reactions. Snap Inc. CEO Evan Spiegel has said that the app will bring back public best friends, but so far, that hasn’t happened.

In the meantime, the friend emojis we decode below have replaced the list of best friends — and provide greater detail. Now, there are more insights into how users interact with friends — you just need to know how these behaviors are represented in the app.

Let’s dive into understanding your Snapchat contacts list better. And remember: These emojis are only visible to …read more