Why Do We Daydream? The Unexpected Benefits of Zoning Out 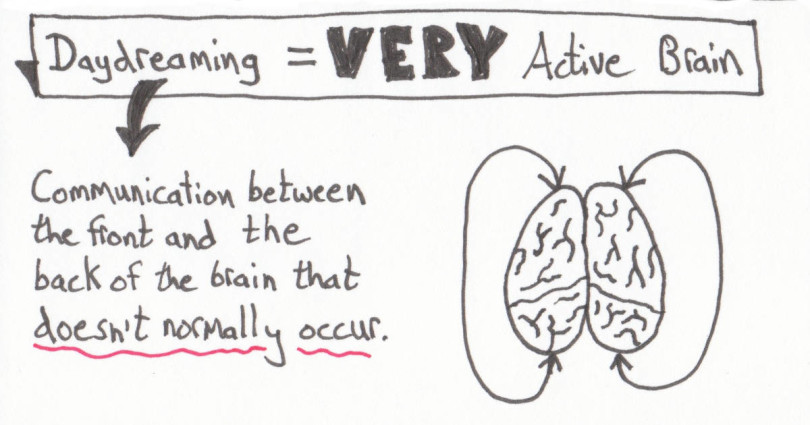 Why do our best ideas seem to come out of the blue?

In part it’s because when we’re doing things that don’t require a whole lot of concentration, such as taking a shower, we’re allowing our minds to wander freely. In other words, we’re letting ourselves daydream.

Of course, no one will fault you for daydreaming in the shower. But at work, daydreaming can be considered a sign of laziness, distractedness, and inefficacy.

The truth is that our brains simply aren’t wired to be focused in a straight line all the time — 96% of adults report daydreaming on a daily basis. And daydreaming is actually a strong indicator of an active and well-equipped brain. It’s been correlated with better working memory, higher levels of creativity, and more effective problem-solving.

But what exactly is daydreaming? What happens to your brain while you’re doing it? And what exactly are the benefits, if any, of letting your mind wander?

Daydreaming is a state of “transient lapses in the control of attention” that “may lead to a shift in attention from the external world to internal mentation,” according to William James, a Harvard University professor from the late 1800s who’s credited as the founder of American psychology.

This is the mental state you’re in when you let your mind wander to internal thoughts — memories, future plans, and other personal thoughts and experiences — and become less aware of your external environment.

Studies found that these “undirected” mental states activated different areas of the brain than those stimulated when a person is focused on a goal or task. This daydreaming network is known as the default network.

“Many times, the ‘dialogue’ that occurs when the daydreaming mind cycles through different parts of the brain accesses information that was dormant or out of reach,” said Eugenio M. Rothe, a psychiatrist at Florida International University.

The default network is made up of the areas of the brain most often associated with memory, self-knowledge, and self-reflection.

Interestingly, psychologists have found that our default network is most active when we take a first-person perspective in our self-reflection, instead of a third-person perspective. This means it’s most active when we’re thinking more passively — in other words, accidentally daydreaming — as opposed to actively thinking about past and future events.

The more often a person tends to daydream, the more active their default network.

The Benefits of Daydreaming

When we allow our minds to wander, innovation and insight can happen subsconsciously. But these anecdotes aren’t just luck: Many lines of research show that mind wandering might be correlated with high levels of creativity. In particular, it helps us find more creative solutions to problems we’ve already tried to solve consciously before.

“It turns out that whenever we are slightly bored — when reality isn’t quite enough for us — we begin exploring our own associations, contemplating counterfactuals and fictive scenarios that only exist within the head,” wrote Jonah Lehrer for The New Yorker.

A study from the University of California, Santa Barbara helps explain why. In the study, psychologists asked 145 undergraduate students to list as many uses as possible for mundane objects such as toothpicks, bricks, and clothes hangers in two-minute spans. This is a standard creative test known as an “unusual use” test.

Then, the students were randomly assigned to one of four different conditions. In three of these conditions, the students were given a 12-minute break where they could 1) rest in a quiet room, 2) perform a difficult, short-term memory task, or 3) do something so boring it would cause them to daydream. The fourth involved no break at all.

Then, all the students were given another round of creative tests, including the “unusual use” test they were given before.

The results of the second round of creative tests? When students were given brand new items to come up with uses for, all the condition groups performed the same. But given repeated items from the first round of tests, the group from condition #3 — who were so bored they daydreamt — came up with 41% more possibilities than the other students.

The psychologists behind the study suggest that those 12 minutes spent daydreaming allowed the group of students to ponder the unusual use test they’d just been given.

“The question needed to marinate in the mind, ‘incubating’ in those subterranean parts of the brain we can barely control,” the study reads.

In other words, daydreaming doesn’t make you a better problem-solver. It allows ideas and experiences to have an incubation period if your mind, giving you a better chance of coming up with creative solutions.

Working memory is our brain’s ability to retain and recall information when we’re distracted — and psychologists have found that daydreaming actually correlates with higher degrees of working memory.

In 2012, a group of psychologists from the University of Wisconsin-Madison conducted a study on the relationship between people’s working memory and their tendency to daydream.

To get the participants of their study to slip into a daydream, the psychologists asked them to do one of two simple tasks: Either they could press a button in response to a letter appearing on a screen or they could tap their finger in time with their own breath. Every so often, the psychologists would check in to see whether the study participants were paying attention.

“Our results suggest that the sorts of planning that people do quite often in daily life — when they’re on the bus, when they’re cycling to work, when they’re in the shower –are probably supported by working memory,” said Jonathan Smallwood, one of the authors of the study. “Their brains are trying to allocate resources to the most pressing problems.”

The study also seemed to indicate that people who daydream more frequently have more working memory capacity than is required to concentrate only on the task at hand.

“When circumstances for the task aren’t very difficult, people who have additional working memory resources deploy them to think about things other than what they’re doing,” said Smallwood.

Finally, studies have shown that daydreaming helps us train ourselves to more successfully navigate social interactions.

In a study of people with dementia, congitive neuroscientist Dr. Miureann Irish of Neuroscience Research Australia found that social skills rely on the same parts of our brain responsible for daydreaming, imagination, and memory.

When we activate our default network, we exercise the areas of the brain that emphasize memory and self-reflection — often based on social and emotional content from our personal thoughts and experiences. Reflecting on these memories can help us learn how to think through and internalize the beliefs, intentions, and perspectives of others and learn appropriate behavior for future scenarios.

As you can imagine, daydreaming isn’t so beneficial if you’re trying to concentrate on a task or a goal. When you daydream, you’re spending most of your energy focusing on your thoughts instead of what’s going on around you.

Why? It turns out that our brains compete for resources between sensory processing of our external environments and our internal thoughts.

“When an external task is performed, focus on internal mental content will likely lead to mistakes or slowed performance on the immediate task at hand,” reads a study by a group of Harvard University psychologists.

This is just another reason why working in sprints and talking regular breaks throughout the day are important to both your creative output and productivity.

So give yourself time for both. And learn to let your mind wander. It just might open the door to your next big idea.