2016 marks HubSpot’s 10th anniversary. When my co-founder Dharmesh Shah and I first started talking about the concept of inbound marketing, it wasn’t an evolution — it was a revolution. Instead of big brands beating small companies with expensive TV commercials, massive billboards, and other types of outbound campaigns as a foregone conclusion, content and search marketing equalized the playing field. Marketing became much more about the width of your brain than the width of your wallet.

Fast forward to today. While the fundamental tenets of inbound marketing still ring true, many of the specific channels and methods prospects are using to find, evaluate, and purchase products are different than 10 years ago.

Even the supply and demand dynamics have changed. In 2006, prospects had an average of four to five choices for any product or service they were looking to purchase. In 2016, I’ve found that that number has spiked to approximately 14 or 15 different vendors — and this holds among most industries. Choices that once occupied a few inches on a shelf at a retail store now expand endlessly on the infinite shelf of ecommerce sites.

Supply is way up, and demand is relatively flat. The increased competition means understanding how your prospective buyers research and buy is even more critical.

I’ve spent the last year studying the changes in prospect behavior, and I’ve come to the conclusion that we’re looking at another revolution — which heralds the second act of inbound marketing.

Here’s what that means for you, your prospects, your business, and your 2017 marketing plan.

The Second Act of Inbound Marketing

Back in 2006, Google helped buyers find the answers to their questions by serving up links to relevant information. Increasingly today, there’s no click needed — Google just gives searchers the answer directly through a rich answer box. The numbers vary on this but research has found that between 20 and 35% of searches performed today result in a quick answer box populated on the SERP itself. 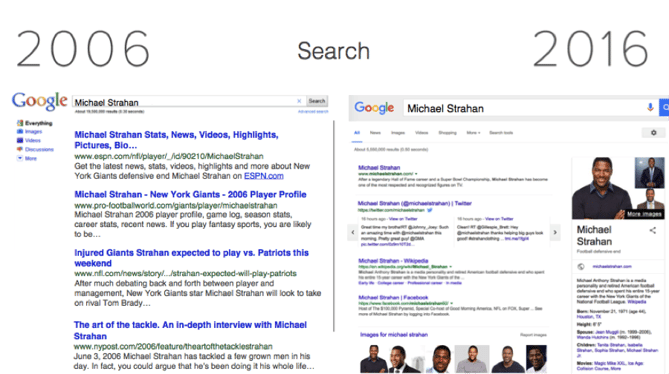 Need an answer fast? Just ask. That’s right, Google has finally fulfilled the original Ask Jeeves promise. In our own research we’ve found that clickthrough rates from these answer boxes are also higher than traditional links. RKG Merkle saw a 516% increase in sessions when a client’s page captured the snippet box.

To adapt, companies should start to create content not just intended to rank in search, but also to be pulled into Google’s quick answer box, and educate your buyer directly on the SERP. Here’s a blog post on how to do this.

Quick answer boxes are not the only way Google is changing. Ten years ago, paid AdWords results took up about 50% of the screen “above the fold.” Today, because of a layout shift Google introduced earlier this year, AdWords ads have moved …read more