Remarketing to People That Have Already Visited Your Website – Whiteboard Friday 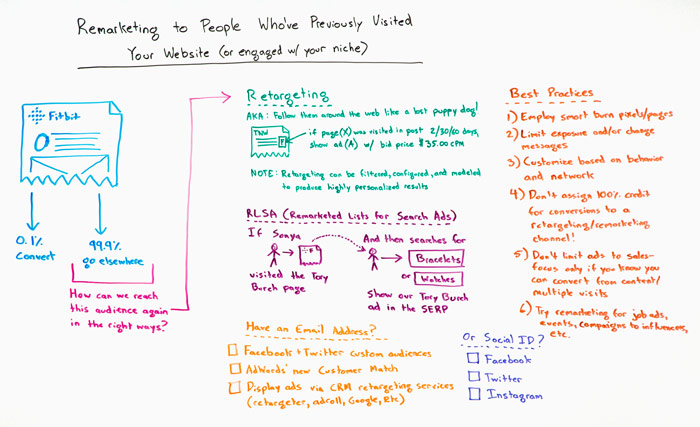 Someone visits your website once, doesn’t convert, and goes on with their day. How in the world do you win them back? Well, the answer may lie in a topic we haven’t discussed for a while: remarketing.

In today’s Whiteboard Friday, Rand discusses how to get back in front of folks who have visited your site or engaged with your industry, new options in retargeted ads, and offers some best practices to follow.

Howdy, Moz fans, and welcome to another edition of Whiteboard Friday. This week we’re chatting about remarketing to people who’ve already visited your website and then left, or already interacted with your niche, your service, your community, and then gone off somewhere else.

This is actually pretty interesting. A lot of times when we talk about the organic marketing funnel—someone performs a search, they follow you on a social network or they see a tweet from you, a Facebook update and they come to your website—well, we focus a lot on trying to convert that person either to a customer or convert them to signing up for an email newsletter, subscribing to something, following you on a social network, or becoming a part of your community.

But there’s actually a lot of data suggesting that the overwhelming majority of people who visit your website… I’ll use Fitbit as an example here. Brad, one of Moz’s investors and also Fitbit’s investor, sent me a Fitbit recently, which is very nice. What am I at today? Let’s see, 5696 steps.

A lot of people who visit Fitbit’s website, I don’t actually know this for sure, but probably about a tenth of a percent of them are converting to a sale or actually buying one of these things. Then, 99.9% are going somewhere else. The idea here is: What can we do to capture this audience again, to get in front of them? We know that at some point they were interested in our product or our service. We want to get in front of them again.

This is something we’ve covered a little bit, but there’s actually a bunch of new options that have surfaced from the advertising and web marketing world that we should probably be aware of. A few of these include things like classic retargeting, aka we follow them around the web like a lost puppy dog. The ads that you see on the side of everything after you looked at that one pair of Zappos shoes that one time, and now you just can’t seem to get them out of your head or your browser. Maybe someone’s visiting The Next Web and if page X over here on Fitbit’s website was visited in the last 1, 2, 30, or 60 days, we want to show this particular ad with a bid price of XYZ.

This is kind of cool. I think where retargeting has really become more sophisticated is in some of the options. We can filter and configure and modify this and model it in such a way that we can say if you visited this page but not these other pages, or if you visited these three pages in a row, we want to show you this. If you interacted on our site in this particular way, we can now do things with apps. If we know that someone has interacted with an app, we can start to do retargeting and remarketing personalized to them.

Moz has used a service called AdRoll in the past. There are a number of them out there. Obviously, Google has a pretty powerful display network around this, too.

Another thing that has been around for a couple of years but we haven’t talked about too much on Whiteboard Friday here is RLSA. That’s remarketed lists for search ads.

This means if we know that Sonja visited—I think it’s Tory Burch who’s a fashion designer who designs a special kind of Fitbit—the Tory Burch page on Fitbit and then we know that she searched for bracelets or watches, even though bracelets and watches are something we would never ever want to bid on as Fitbit because we’re not in the fashion category, but if we know that Sonya has previously visited a page on Fitbit or any page on Fitbit’s website potentially, well, now that she’s doing these fashion related searches, we might say, “You know what? Let’s show our Tory Burch ad specifically for that product, which is a fashion product, in the search results in the ads there.” That’s pretty cool.

We can customize this in a ton of ways. You can imagine a bunch of different uses based on what people visited and then what they searched for. Of course, you can bid a lot higher for those types of ads because you know the prior behavior. You can also expect a much higher click-through rate and probably a much higher conversion rate from those ads because that person has already visited your website and is familiar with your product or your brand.

If you have their email address…

If you have an email address, or a social ID, or an app ID, or even a phone number actually, you can use Facebook and Twitter’s custom audiences, which are pretty cool to do targeting specifically to people on Facebook or on Twitter whose email address you’ve uploaded. If a lot of people have signed up for your email newsletter or have started your product purchase process, maybe they went to Fitbit. They entered their email address to sign up, and then they never completed a purchase. We can get back in front of them using Facebook or Twitter custom audiences or using AdWords.

Actually, as of two days prior to us filming this, but probably a few days before, maybe a week or two before this Whiteboard Friday comes out, Google just introduced something called customer match in AdWords. You can upload an email list and then get it in front of those emails specifically when they’re performing searches or across their display ad network.

You can do those via places like Retargeter and AdRoll and Google. Those are the CRM retargeting models and services. That’s pretty cool.

Or their social ID…

If we have social IDs, for example, if you Facebook connect to Fitbit or if you connected via Twitter, I think you can also use Facebook’s connection on Instagram for Instagram ads now if you’re part of Instagram’s ad program. A bunch of options there as well.

A few best practices before we finish here.

Campaigns to influencers, I’ve seen some really creative content marketers who said, “Hey, you know what, we know that here’s a list of journalists and bloggers that we’ve reached out to. We can take that email list and upload it.” You need a minimum of a thousand email addresses for all three—Facebook, Twitter, and Google—for the CRM style stuff. Make sure that you have that many emails before you try and upload. If you do, you can get in front of those influencers with content. If that’s leading to links and press coverage and stories and the bid prices are low, which they often will be, you may have some big advantages there.

Hopefully, I will see some very creative ads from all of you following me around the web. I look forward to discussion in the comments. We’ll see you again next week for another edition of Whiteboard Friday. Take care.